hi! i’m uchuu and i’m currently translating devil/prince of the devils.
( ´ ▽ ` )ﾉ  updates are roughly every one to two weeks, depending on my schedule.

His older sister’s belly was very cold and bulging slightly.

He took out the flower dress that he had bought in the afternoon from the elegant shopping bag. With long legs, he jumped straight on to the freezing morgue tray1. Then, Ji Huan kneeled between his older’s sister legs and covered his older sister’s body with his own. He undid the first button on the patient gown that his older sister had on. The second button…

His older sister’s body, which had been hidden by the patient gown, looked very miserable.

Ji Huan lifted his head and looked at his older sister again.

His older sister couldn’t smile at him anymore. She laid stiffly on the morgue tray. Her face was lifeless, and her lips were purple with death.

Lifting up his older sister’s body, Ji Huan put the flower dress that Grandfather’s money had bought on her. Then, due to the movement of the dress, Ji Huan touched her stomach once again.

Just at that very moment, when Ji Huan put his left hand on his older sister’s abdomen, he suddenly felt his palm push up!

He moved his palm away. Then, he horrifyingly saw his older sister’s stomach, which originally only bulged slightly, squirm violently. It seemed as if there was something struggling inside. From his older sister’s thin belly, that thing wanted to come out!

Even if Ji Huan was more daring, even he was frightened by the sudden large throbbing! For a split second, he reflexively wanted to jump off the table. However, at that very moment, he heard his older sister’s voice again.

Among his panic, Ji Huan saw his older sister suddenly sit up, and like that, she stood up straight. She suddenly lifted her right hand. Her middle finger, ring finger, and little finger were gathered up in the middle of her palm. Her thumb was up, and his older sister raised her middle finger closely to the center of her mouth. Then, she pointed her index finger at her body.

To be exact, she was pointing at her stomach.

What his older sister wanted him to take away was the thing in her stomach!

Yes, in that “dream”, this was the message that his older sister really wanted to convey.

Clenching his teeth, Ji Huan resolutely pushed down on his older sister’s stomach!

That thing seemed as if it wanted to struggle. The moment that Ji Huan pressed down, he felt a powerful resistance. The strength was considerable, and Ji Huan had a moment of hysteria: if he couldn’t hold it down, “that thing” would burst through his older sister’s stomach and jump out!

That thought was too terrible. Ji Huan couldn’t help but increase the strength he used to press down.

That thing discovered that there was no way up, so it went down.

Ji Huan could sensitively feel that thing go down.

In this moment, the inside of Ji Huan’s mind was blank.

Even though he was quiet and reserved, even though he was nearly 180cm tall, even though he usually looked like an adult, he was, after all, actually only seventeen years old. The first time he came to the big city was alone to face his older sister’s death. His heart was perplexed, and the following series of strange matters had drained the rest of his brain cells.

A lot of things had happened in the past two days. The more strange events that he encountered, the more numb he became. So, at that very moment, another strange event was happening in person, and Ji Huan’s brain was blank. His thoughts were very simple: first, he had to take out the thing that his older sister wanted him to take away. Second, he couldn’t let that thing tear open his older sister’s stomach.

Ji Huan unconsciously pressed down on his older sister’s abdomen and stomach, and sealed the way going upward and outward. That thing could only go down.

An unnatural tremor, just as if… something was there… as if it was pushing open his older sister’s legs…

Shivering, Ji Huan uncovered the flower dress on his older sister, then ——

He saw black blood, and accompanied by the black blood, a small black mass rolled out from the space between his older sister’s legs.

That thing was very small, and it was the same color as the surrounding blood. Ji Huan didn’t even notice it at first.

When he touched it with trembling hands, Ji Huan felt something wet grasp his finger. Something damp with a temperature…

Then, Ji Huan heard the weak sound of crying.

The sound of a baby crying.

At that moment, his older sister’s right hand had amazingly turned back into the gesture that he had seen in his dream!

His face was pale, and Ji Huan rolled off the tray. His body facing his older sister, he walked step by step backwards. He took one last glance at his older sister, and he rushed out of the morgue’s door without turning his head back!

Stiff-faced, he told the attendant goodbye. Ji Huan walked quickly. He walked out of the morgue3 and out of the hospital. Just as he was leaving, he saw a car stopped at the hospital gates.

It was those black clothed men!

Thinking of this, Ji Huan’s heart tightened. His steps turned to the right, and his figure instantly submerged into the crowd.

He walked too quickly and didn’t notice that because of what was in his pocket currently, tiny spots of blood had been dripping along the way.

However, like someone was cleaning it up, those bloodstains slowly disappeared.

When the black clothed men walked into the morgue, the bloodstains had just been cleaned away, and there was only a little bit still remaining around the morgue tray4.

The leader of the black clothed men walked directly over to the morgue tray that the body of Ji Huan’s older sister was on.

“Damn it! This woman’s bone marrow was just the right match. We made how good of an offer! What a wonderful meat pie that fell from the sky5, yet this woman unexpectedly didn’t know what was good for herself and refused.” The black clothed man’s right hand heavily pounded on the morgue tray.

The bodies were extremely quiet.

“I heard that she was pregnant, and because of that, didn’t want to affect the child…” Another black clothed man suddenly said.

“Conceived a bullshit pregnancy! The medical examination result showed that there was nothing in her stomach!” The leader of the black clothed men entirely didn’t have the well-mannered appearance that he had had in front of Ji Huan before. At this moment, he was furious and looked like a demon: “I told you to use lighter strength when causing the accident. You crashed into this woman’s body and caused this ghastly appearance. There’s no way to make use of this waste!”

“Also, who on earth notified her younger brother? The bone marrow is something you can only take when they’re alive. A relative suddenly coming by disrupted this Laozi6‘s plan!

Like a tyrannosaurus, the man roved around the morgue. Then, he suddenly raised his head: “That’s right, that woman has a younger brother. Look for someone to coax him into taking a test, he might be a match…”

Thinking like this, the leader of the black clothed men’s spirit rose. He excitedly looked up towards his companions, but was confused by his companions’ expressions now.

“What are you doing? Why are you like this… looking at me foolishly?” He looked perplexedly at his dear accomplices, and it was difficult to hide the impatience in his tone.

“Leader… behind, behind you…” The black clothed man who had spoken before was looking at him with a pale complexion. Trembling, he pointed his finger behind the man.

“What are you pointing at me for? Is there a ghost behind me… ah?” The man turned around with his eyebrows furrowed. When he saw behind himself clearly, his voice instantly disappeared.

Currently, there was a man standing behind him that he had not been aware of.

The man’s clothes were very familiar to him. They were this hospital’s clothes of the deceased. Even more so, he also had an impression of that man’s appearance. When he sent someone to crash into that woman, the one who unfortunately died in the car accident was that woman’s boyfriend.

Previous | Table of Contents | Next

whew, we finally have hei dan! we should actually see more of them in the next chapter. meanwhile, ah jin is still a very long way away… _(:3 」∠)_

will add later – there was a lot of slang that im too dumb to know and i need to research.

1 停尸台上: i couldn’t find an exact translation for this, but i’m guessing it’s just like one of those rolling metal trays like this (bucket not included): 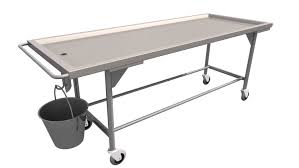 2 I had to reorder this paragraph because the original didn’t make it very clear what the point was of Ji Huan’s statement.

3 病栋 bìngdòng: i couldn’t for the life of me figure out what this meant besides the literal “sick building”, other than like the title of an ova about night nurses. since they’re going to where ji huan’s big sis is, i assume the author meant the morgue, or some similar wording.

4 病床 bìngchuáng: lit. “hospital bed”, but they were calling it a morgue tray before, so i went with that.

5 天上掉馅饼 tiānshàngdiàoxiànbǐng: to have something fortunate fall into your lap.